As much as I love Nigeria, I also HATE that country so much sometimes. I lovee documentaries, and lately, there have been a number of AMAZING documentaries on Nigeria(e.g Channel 4 Child Witches, and Forced Marriage in Northern Nigeria), but they are usually by foreigners. Poison Fire is a documentary by a number of Nigerian enviromental activists from Bayelsa state about the problems of gas flaring in the Niger-Delta. The film has been submitted to various International documentary film festivals and shown in theatres in various countries around the world. It is bloody brilliant because like any good documentary, it makes my blood boil!! More information about the film at http://poisonfire.org/.
Here is the film:


Watching this I am shocked at how little I know, as a Nigerian, about the enviromental problems that has and continues to exist due to oil. It is a total disgrace. Now I understand why these young people are so angry. 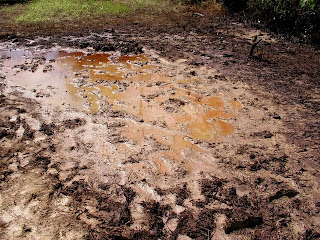 The duty on rests on the company flaring the gas to put a stop to gas flaring so why are they waiting for the Nigerian government for funds? what about all the billions of money that they are making everyday?? I mean look at the alarming effects of thier activities on the people's daily lives?

The lawyer in the film says "The bottomline is that shell is above the law." This is disgracefull, especially for me as lawyer, that a High court in Nigeria can set a ruling, and they can completely ignore it and go on doing what they want. Intrestingly, there is currently a case in New York accusing Shell of taking part in the execution of Ken Saro Wiwa at http://news.bbc.co.uk/1/hi/world/africa/8067218.stm; It seems like with everything in Nigeria, we have to abroad to get justice.

Regardless of the part that shell play, I believe it is up to the NIGERIAN GOVERNMENT TO DO SOMETHING! People keep blaming shell, but our government, and not Shell, is responsible for our people. It is up to Nigeria to have a judicial system where court judgements are not trampled upon by greedy multi-nationals, it is up to us to set standards that we enforce to the letter that the companies have to adhere to. At the end of the day, they need us more than we need them. Whatever standards we set, they have to adhere to or else they are free to leave, but we dont seem to realise we have the upper hand. Why are these atrocities not being committed in other oil-producing countries? It is because they have a government that ensures that thier people and thier interests are put FIRST! I have been to Dubai and seen the blessing that oil has been to them, why can't that be the same for us? Gosh am getting so worked up just typing this.
Goodluck Johnathan is the vice-president of Nigeria solely because he is from the Niger Delta, there is now a Ministry for the Niger-Delta with some millions of Naira in budget allocation, but have we seen any change? Of course not!
Like I always tell my Ghanian friends, I hope oil does not become the curse that draws them back from the progress they are steadily making, because black people never seem to do better with natural resources, see Sierra Leone with diamonds and Congo with Coltan. Damn Africans in general have issues!
Posted by miss b at 18:42