I came across an article on BBC news listing a recent poll that was a done about who Nigerians consider living legends, and was slightly surprised at the results. Although the poll is not complete, the preliminary list looks this-

Although this list is not according to populartiy, I agree with most of it, but not all. Firstly, what is Hakeem Olajuwon doing on that list? When was the last time that guy even went to Naija? Now I have nothing against him, he was a legend in his own right, but unlike other Nigerian sports men who have been recognised abroad, he has not been as forthright as he could have. Other sports men like John Fashanu and Kanu have been very prominent in helping youth with sports and other charitable work. 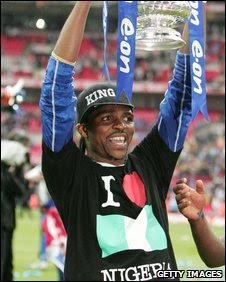 Kanu definately deserves to be on the list, and I consider him to be one of the greatest sportsmen to ever come out of Nigeria. His classic rags to riches story, his humbleness, and battle with heart problems have made him an icon all over the world. But it is inherent love for Nigeria that stands him out from all the other great Nigerian sportsmen.

Another person that I look up to, especially as a lawyer, is Gani Fawehinmi and he definately deserves to be here. As the one of the first lawyers in Nigeria to fight for human rights of people, he set the ball rolling for people like myself that have no interest in commercial and litigation in Nigeria which is where the focus has always been(because thats where the money is). He was also the first to produce Nigeria's weekly law reports amongst various other publications, and it is one of my dreams to work for his chambers!

Chinua Achebe, Wole Soyinka and King Sunny Ade are certainties for the arts.

Mrs Dora Akunyili is another Nigerian Legend, and embodies the saying that what a man can do, a determined woman can do much better! Her feature in Time magazine, also shows that her selfless work has gained her international recognition. Whenever I am arguing with people who believe that as Nigeria is so corrupt, since we cant beat them, we should join them, I use her as example of someone who is willing to show that sometimes, our goals are bigger than ourselves.

I would have preferred that religious leaders were not includes, as thiers is a calling, but if they must then no one is more deserving than Pastor Adeboye. Even though I am not a christain, I believe that he is a man of God, and greatly admire his humitly which is refreshing in this age of the armani and gucci wearing twenty sumthing year old pastors!

The bussiness men -Aliko Dangote is also another man no one can argue should not be here, and whom I greatly admire. This is because growing up in the North, we are not as entrepreneuring as those in the south. It gives a great sense of pride when one of the few northern bussinessmen turns out to be the most successfull in Nigeria, and become a billionaire in dollars, through hard work alone, with no (apparent) meddlings in any politics. It is also his humbleness, simplicity and media shyness that makes him that much more unique.

David Dafione and Philip Emeagwali I did not know well until now. But thanks to the power of the internet(shout out to Nigerianwiki.com lol) I feel quite ahamed as they are prominent people.

David Dafione is apparently an accountant, bussinessman and patriarch of an accounting family listed in the Guinness book of records as having the largest number of accountants in one family. He is also the owner of the Ceddi Plaza in Abuja and was one of the leaders of the movement for the creation of Delta State in the 1980s. I had vaguely heared of him, but not as a Legend.

Pat Uomi is a presidential aspirant that was the former adviser to various presidents, academic and lecturer. He is one of the best economists in Nigeria, with several publications under his belt. In any other country, a mind this sound would be advising us on financial issues, but then its Naija!

Philip Emeagwali is computer scientis/geologist who was one of two winners of the 1989 Gorddon ll Prize, for his use of the Connection Machine supercomputer to help analyze petroleum fields. He supposed to be a genuis and one of the few actual scientists that Nigeria has produced and definately deserves recognition for his work. I never heared of him, but we definately need more people interested in science in Niaj mennn, actually we just need more people interested in fields that do not bring the quickest money!!

Generally, I do not belive that ANY politicans alive should be classified a legend. If Nnamdi Azikwe, Sir Abubakar Tafawa Balewa or Samuel Akintola were alive then there would be no question. Obasanjo could have been classified as a legend in his earlier days but definately not recently.
However, Yakubu Gowon only makes the cut because he prevented the secession of Biafra during the Nigerian civil war. Which brings us to the question of why Emeka Ojukwu is classified as a legend? His actions/inactions as you may see it, lead to the death of thousands of people, in what has been referred to as genocide. Although I believe he started out with good intentions as a reaction to the mass slaughter of Igbos in the North, we are inevitably always judged by the consequences of our actions and not the intentions we originally had(see Mugabe for reference).

I will classify Anthony Enahoro a legend because my dad loves him, and so I am a bit biased. I remember him as the chairman of the National Democratic Coalition, NADECO; a pro-democracy group that fought against Abacha till his death.

Balarabe Musa I do not know much about, just that he was the former govenor of Kaduna and is a radical socialist, which is not commonplace in Nigerian politics.
He described Nigeria as "a drunken giant, still groping in the dark, that seems not able to find her bearing".
It is hard to get an opinion on him, because politicians in Nigeria are always viewed differently by people either supporting or against them.

Personally, I think some of the greatest Nigerians are dead! So heres my list of greatest dead Nigerians:

There are still a huge number of both recognised and unrecognised Nigerians who are doing great things, and are legends in thier own right.

What do you guys think of my list? Are there any that should/shouldnt be there and why??