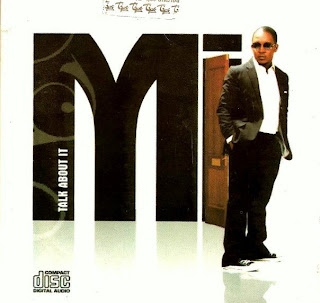 Ladies and Gentlemen blogville, I am back again with another review, this time for your listening pleasure. I have decided to only do reviews of albums I love and not waste energy hating on any albums, although I have listened to enough crap albums to last me a lifetime! Are you sitting comfortably? Then I shall begin…


Now I have been in love with my fair share of Jos boys but M.I has taken me over the legal limit. This dude GBONO FELE FELE, as in he's too MAD! Some people do not feel see the big deal, and I think if you do not see the hype with Lil wayne or Kanye West, you might not see the big deal with him either. He has that same effortless flow, and it feels like he could do this in his sleep.

Before the drop of this album, he released a (free) mix tape called Illegal music which bagged him the best hip-hop artist at the hiphopworld awards in 2008. He rhymed over the beats of Lil Wayne's A milli, Jay-Z's 99 problems, and Kanye's Cant tell me nothing. What stood out was his take on D'banj's Gbono feli feli which he KILLED and which signaled the arrival of the “short black boy” to the Nigerian music scene. This was the track that made me fall in love with him. With lines like-'the boy got gifts like santa', "girls flock to him in twos like Noah"(sickkkk), "these other rappers so last year like celtel", "your flow is basic and mine is acidc" "i solo like isolo", "nobody wanna try m.i like AIDS test". The whole mixtape is just him showing off his lyrically skills, and for the sceptics, you should listen to this and you will convert. He's confidence in his ability is amazingly intoxicating and I knew he was the shit as soon as I heared this! You can download the mixtape for free @ http://timmynaija.com/bestnigerianmusic.html


If you thought that goodie bag was great foreplay then prepare yourself for the Koko, as the amazing album titled "Lets Talk About It" was finally released. This is hip-hop in white tee and jeans, taking off the pinstripe suits of Naeto C and WFA. Fully Nigerian but with no compromises made, no cheating with borrowed beats and fantastic word twisting guided by the L-Boogie crew of the Chocolate City label. MI has arrived.

The album follows strictly the recipe for the Great Nigerian Album. 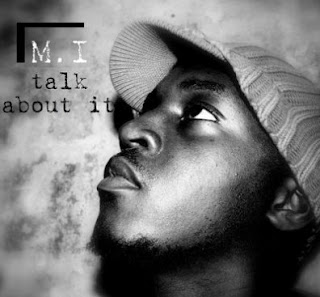 We have the great first track, the one so good that you heave a sigh of relief that your artist didn’t disappoint. The track that sets the overall tone of the album; see Nfana Ibaga by Tuface (honest story telling) and Trouble Sleep Wanga Wake Am by Fela (serenading saxophone and politically conscious) for illustration.
His first track is called “Anoti” featuring Gabriel meaninig Unbeatable-- MI goes straight for the erogenous zones, repeatedly reciting his name over muted talking drums, this couldn’t be a more fitting prelude to what was to come. He knows he’s good and has no problem with saying so. He has just the right amount of arrogance needed in hip hop. He turns the beat around and to perfection, molding the kick snares to his lyrics. Fast pace changes with twista-esqe tongue twisters such as:
"I got the magic static/ I got the chrome automatic/ so systematic/ erratic/ flow so melodic/ neurotic chronic/ so supersonic/ bionic "
And sweet sounding words that collapse into one another in mellow fade outs like:
"Feel my vocal/ on this local instrumental/focal point to drive you mental"

The second essential ingredient is the socially conscious song. Our leaders are corrupt; no fuel that sort of thing. MI has a special take on this with "Crowd Mentality" featuring Uche encouraging us to “think, dream and fly.” Its wonderfully poetic and encouraging in that sense, and does not feel preachy at all. 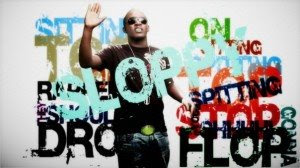 "Fast Money Fast Cars" featuring Wizkid has to be the most fun ever poked at runs girls. It is absolutely hilarious with lines like "She doesn’t need a dude whose bank account is very large/ she wants the man that owns the bank/ the head nigga in charge" "What you driving baby boy/Cause an end of discussion will signal end of discussion/7 series if you serious" "Mike Adenuga types, I need a man to make me Glo". It uses real life Nigerians like Dangote, Keke, D1 etc to illustrate the point. Regarldess of the playfull lyricall wordplay, it has an overlying moral message.

The religious song is here too, in the form of "Jehovah". Self-explanatory. 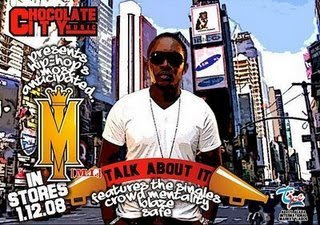 The third ingredient in this great Nigerian Music cookout- our red pepper and maggi- is the party anthem. MI gives us two, "Area" featuring YQ and my fave "Teaser" featuring Pype which is absolutely amazing, no need for big grammar here. Its slow bashment, with the booms in the right places. Ladies will want to be his “diva for sheeza”

The final touches to this music feast cement MI as the lyrical master that he is with versalicious (yes I just made that word up) tracks like '"Short Black Boy". The beat is amazing and low enough for you to understand that the focus is on the lyrics which he ensures you do not detract from.

"Forever" featuring 2 unkown guys(info wanted) is the only romantically inclined song on the album, with a techno/dance beat that flows nicely.

"Talk About It", featuring Leony is the title track, and plays the line between Ajebotta and Ajepakos- an oldie but a goldie. Kukuruku or Cock-a-doodle-do? You decide! Its higly political but manages not to sound like a sermon either.

"Money" which is the “before I got here track”. This has a skit that flows nicely into it and is one of my fave tracks on the album. With lines like-"I looked at my friends/ and got that itch/ to scratch that cash/ and look that flash" This song embodies what I love about the album. There is NO track where he is bragging about the amount of money he likes. Instead he's chorus sings "Money slow to enter, Money fast to go, Where the money go, I no Know". It is like finding an oasis in the money obsessed Nigeria hip hop scene(need I say Big Boy, Arab money, Maga don pay?). It is a humble track just like he is. He brags about his talent, which he rightly should, but never about material things. 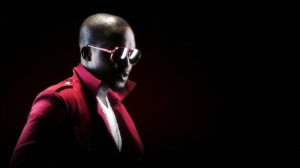 "Blaze" boasts a mouthful of featurettes, i.e Jesse Jagz, Ice Price and Blaise with each artist satisfyingly pulling their weight. You are hooked from the moment “put your lighters in the air” is crooned out, and it makes you really want to light up!! Again this song illustrates another thing I love about the album, he features a HUGE number of FRESH talent. They are all increadibly talented and hold thier own next to M.I which cannot be easy, and I cannot wait to see what they will do individually. With how much he has blown, he could have had any of the hottest artists but decided to bring out some underground acts like he was. The female rapper Blaise rhymes tight on this.

"Safe" featuring Djinee is my fav track in the whole album. Winner of the best rap single at the hip hop awards it is the most lyrically explosive thing I’ve heard since the first time I discovered Nigerians actually can rap. It is a one stop shop of hits, as MI mimics all the biggest singles of 2008. You’ve got everything form Wind Am well To Wiskolo Whiska; You Know My P to Yebaribaba. He utilizes the hit line from all these and more to make one fantastic single.
Yebaribaba sanboribobo/ the ladies going loco/ when they hear his vocals/raps in a chokehold/other rappers local/they rap with a flow colder/I'm the Koko!

I could quote M.I all day but I will exercise restraint. ;-))

My only problem with M.I is that I dont think he sounds as hot when he's featured on other people's tracks. His flows in Dangerous by Dipp or Lade by Djinee are average, definately not up to the stuff on his tracks.
Regardless, this album is one of the best I have heared this year, even in comparison with foreign stuff. The number of skits give the feeling that the whole album is telling a story which all the tracks fitting together like a solved puzzle. You must also applaud his bravery to feature unknown artistes on his album- a gamble that paid off.
Taking over from where 9ice was 400 days ago, MI reigns supreme and in his own words:
"If there’s ever been a rap this fly/it had to have been done by another MI"

You can download to M.I's album on itunes at http://www.apple.com/search/ipoditunes/?q=m.i+talk+about+it and check out his blog at http://www.miishiphop.blogspot.com/