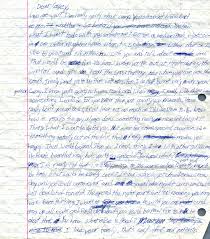 P.s- (I probably should have typed this because on reading it over I realise I rambled, as I usually do, and there are a number of spelling mistakes)
P.p.s- I realise my handwriting gets worse as you progress. Feel free to call me to explain anything you do not understand J

Footnote- I know you know about Cynthia. I will explain it all when we talk
Posted by miss b at 11:39 4 comments: