Disclaimer--if you dont like Beyonce, you can stop reading now!!

Heyy people,
On saturday I went to see beyonce live in concert and it was FREAKING AMAZING! I am not the biggest beyonce fan but I have seen videos of her perfomances and we thought it would be a fun way to celebrate end of term, and boy was it worth it!! And as usual you know I'll describe it to y'all in excruciating detail!

Firstly we got GREAT seats, which was a big fear as we got the tickets just 4 days before, from one those sites that re-sell it, which meant we paid £10 more than the company price, but it was worth every penny!
Secondly, the crowd was very diverse, for e.g to our left were these gay couple(the guys were too fine ohhh, what a loss for womankind lol), and on our right was a father and his 2 sons(soo cute)! There was also a large number of couples but surprisingly very few black people.
Most importantly, the crowd was liveee, and they definately get you gingered even if you are not her biggest fan. I was at the Thisday show in London, and the people just sat there in silence like they were at a funeral. I dont know how far with Nigerians forming at shows oh. My friend went to the hip-hop awards in Abuja last week and said people just watched and clapped. How dull! When I'm at a show, I sing at the top of my voice, dance, jump, shout, whistle and wild out until I tire myself out! Luckily I went my crazzy friend Alero, and this babe took it to another level. This babe blocked my left ear with screams and she lost her voice the next day!!

The show was meant to start at 7.30 and it started at exactly 7.29 (chai I love British timing). The first act was this lady that looked and sounded like Amy Winehouse who was pretty decent. She sounded like a really good kareoke though, but was quirkey and fun! The second act was Shontelle, the Barbados born pop star with the songs 'T-shirt' and 'Roll it'. This lady seemed to be put there to show how amazing Beyonce is because she was so BORING! OMG she looked like she just woke up from sleep and was just walking from one end of the stage to the other tossing her very very long (*cough*horrible*cough) weave! I just wanted to pass her some of my red bull after she did her 'roll it' dance because she looked exhausted! We showed her love though cause we were super-hyper at this point.

Then there was a 10min break which got people really restless. Just as I was starting to get impatient, the set opened to reveal her all girl band, big mamas back-up singers and the sexyilicious dancers. She walked onto the stage with the song "Diva" and its safe to say people lost it, the screaming was too much! She is wayyy more beautiful and skinny in real life! But her voice sounds exactly like it does over her songs. 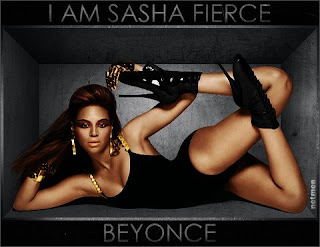 Now we came up with 3 theories to explain her brilliant performance:
1)Shes using some sort of jazz
2)She was high on some sort of illegal drugs
3)She has a stunt double

That is the only was I can explain it. It is inhumanly possible for one person to have this much energy. To sing alone is tiring, to dance alone is exhausting, to entertain and co-ordinate a one person show takes calculation, to keep changing outfits and switching up the tempo is complicated, but to do ALL FIVE things at the same time has to be either be a rare gift or due to one of my reasons above(and I am inclined to think its the latter lol). There was no break, and she only left the stage to change outfits.

She performed EVERY SINGLE SONG on her new album, although some were cut short. She also did her major songs from previous albums such as Baby boy, Check up on it, Upgrade you, Deja Vous, Irreplaceble(which she let the crowd sing completely, this is the point we lost our voice and my hand started hurting doing 'to the left to the left' lol). She then did the destiny child classics such as Survivor, Bug a boo, Say my name, Loose my breath, Independent women(which this guy in front of us was yelling the words to......yes very disturbing). It was 3 hours of pure unadultarted entertainment. She has a way of engaging the audience, and you can tell she does this all the time. Her energy is infectious to say the least, because she gives it 100%. The outfits, the sets, the timing, the choreography, the lighting, the story telling, the effects, all come together to give an ecstatic climax(no it is not an exaggeration!).

I would definately recommend it to anyone because its a guranteed good time. And for all Beyonce haters, no matter the issues you have with her, you can never deny that she gives it her all. I just wish that whatever I do in my life, I am as dedicated, hardworking and committed to it as she is!

Heres a video I took with my camera, if you ignore the inherent screaming, tone deaf singing, shaky hands and crazy waving, you can get the general idea.......lol