Heyy bloggsville,
I am supposed to be working on my dissertation but I thought I'd do a bit of blogging as I have been putting it off for ages. I was in Yankee for my cousin's wedding, (which was amazing by the way) and I started comparing Jand to Yanks. I decided to make a list of pros and cons. I have been to Yanks several times but never taken the time to compare it to my beloved J.D.(Jand aka U.K)

Yanks is like arsenal, most people either love it passionately or hate it completely. There are a few people like me who are still on the fence about it. People like my dad and bro absoloutely HATE it. It is surprising because they both love money and capitalism and the U.S is the king of both. It is a land of rags to riches, where hardwork pays off in multi-million dollar cheques. Innovation and ingenuity are encouraged from as early as possible, which is why alot of the great inventions of the past decade-the ipod, iphone, microsoft, medical breakthroughs etc have come from there.
But for every good that America boasts of, there is an equally stupid thing. And lets face it, America is the land of stupidity as well.!!
So here a list of the things I love about the U.S

1)Food- I know you guys will not be surprised that this is number 1 on my list. Chai they have good food there. Every type of cuisine, flavour, texure you can imagine. There is so much variety that you can go a whole year without eating the same thing twice. In my two weeks, I had chinese, mexican, southern, cuban, thai and excellent Nigerian food as well. If have a sweet tooth you'll be spoilt for choice. I had the best ice-cream I have ever had at this place called Cold Stone Creamery. That ice-cream did things to me that I did not know food could! 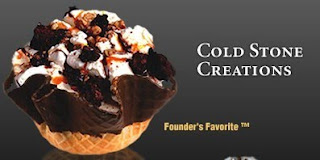 I also went to IHOP which officially has the best pancakes and omlettes in the world!! 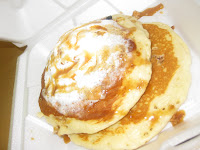 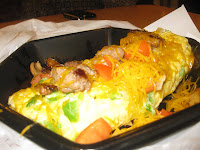 The best part is that it is CHEAP! and comes in huge quantities. This combination is why Americans are overweight.

2)The People- When you live in jand for a long time you get used to being as courteous as is barely necessary. British people are polite and thats it. Anything extra and you are on a long p!!When my friend came over from the states, I had to keep cautioning her to stop talking to strangers. We would go to a resturant and she would strike up a convo with the waiter, in the mall she would say hi to random people and indulge in convo with random dudes in a club. I was like HABA ds girl you talk too much oh, just say hi and lets go oh, before they come and carry us go!

But this is genuinely how americans are. They are soo friendly. At first I was like chai these people talk too much oh, just bag my stuff and let me go, watin concern you where I come from!! But after a while, you start to enjoy it. They ask how your day is, random people compliment you, they always go out of their way to help a stranger, and they actually seem to enjoy it. It is very refreshing. So many times, I ended up buying more stuff than I needed because the staff are just so damn helpful!! They all have that air-hostess spirit(if you are not flying british airways, cause those ones dont know how to smile).

3)Pride-Americans LOVE america!! Gosh it is unreal!!! You'll see people with american flags on their homes, cars, keyrings etc. Since it is essentially a country of immigrants, everyone has the right to claim it as home. A Mexican, Cuban, Indian or Black American all have the same sense of self-worth. I mean a Black man who is the son of an immigrant can be the president. An immigrant like Arnold Swarchenegger can be an actor and them become the governor! A talk-show host can rise to become one of the richest and most powerful woman in the world.

In jand, if you are not British, you will never be under any illusion that you are home. Even those that are British do not send that much. All they do is whine, moan and bitch about every little thing-the weather, Gordon Brown, David Beckhamp, the credit crunch, council tax, delays on the tube, the weather, bills, immigrants, queues.............Chai British people can complain!! The majority, i.e working class do not seem to have that national pride and charisma that Americans have, unless they are abroad or complaining about immigrants running down thier country!! 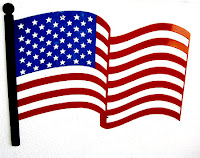 How many British kids today know the history of thier great nation. Or how good thier politics and democracy is. How many of them appreciate how strong thier economy is in light of its size and population. If you look at other European countries like France, Germany, Italy or eastern European countries like Russia, they all have that sense of pride that Americans have and Britons lack so vhemently. Even Nigerians, as much as we have problems, have a certain pride that can never be taken from us. The poorest Nigerian will still feel more important than a man from Togo or Benin etc because haba una no even speak English abeg!!LOL

4)Hardwork-Its funny because there is a perception that Americans are LAZY, and all they do is grow fat, have children and dance in rap videos. On the contrary, I think everyday middle-class Americans are so bloody hardworking. They work INSANE hours, crazy shifts, 2-3 jobs, hardly get any holidays and get taxed like mad. My friends in uni take crazy amount of modules, while working and playing sports etc for scholarships. And they still come out with mad gpa's. For example to do law, you have to do a pre-law degree for 3 years or so and then the law degree while doing other pointless minors like psychology all of which you have to pass. Na Wa oh!

People are always on their grind, everyone has a side hustle-music, writing, sports etc. People are so multi-dimensional. Which is why a surgeon like Khalid Hussein could also be an award winning author. The sports starts act, the actors' sing, the singers' model, and the models write and the writers' trade!!! Its insane!

I think this is because of the capitalistic nature of Americans. Too much is never enough. Everyone always wants more, bigger, better, shinier. This could be a good or a bad thing depending on your stance on capitalism.
In jand, no one is bothered to be doing two things at once. If you are a doctor, you stick to that. Everyone aims to have a 4 bedroom house, 2 cars, a dog, 1.5 kids and enough to go on holiday twice a year. Personally, I like this lifestlye. I am not about all that fast money fast car sturvs. It is the reason why someone like Star scotch or Mike Tyson who were worth millions of dollars can be declared bankrupt. But on the other hand, it is only in the U.S that people like them can come from nothing can be worth millions. In Jand, there are few rags to riches stories. Wealth is usually passed down from generation to generation or by winning the lottery. Hardwork pays off too but not in multi-million dollar cheques!

So thats my list. I will write the things I do not like about the States in my next post.
Enjoy and feel free to tell me what you guys like/dislike about both!!
xoxo