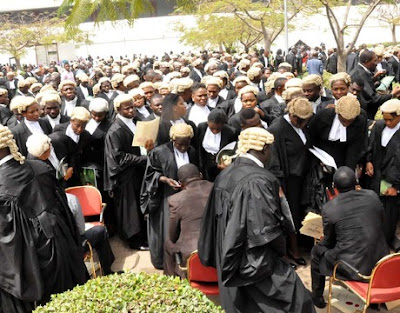 Hello blogworld,
I had to write this post out of fraustration so forgive me if I sound a little harsh. Passing through any Nigerian institution or NYSC always starts with 'registration' and ends with 'clearance'. Online registration is usually used at some stage but this never aids the process. For Law school, I had to go through 'clearance' last week and it was an increadibly long, fraustrating and tiring process. Part of what makes it so fraustrating is the fact that it could actually be so so simple.

The first step involves paying N30,000 as 'Call to Bar Fees' to a Zenith account and then N2000 to a GTB account as your 'Practising Fee'. For those that do not know, banks in Nigeria tend to be a nightmare with queues, so it is advisable to do this a day before your actual clearance date. Alot of the bank staff usually have no clue what you are talking about, and have to ask a supervisor or find the special teller from someone else. A friend of mine went into a GTB and was told that they had run out of the special tellers and had to try another branch. GTB branches are not exactly at every corner.

The next step involves every single Nigerian Law School student travelling to Bwari to submit the required documentation. This includes people who have been in various campuses across the country and have never been to Bwari. On my way to school we spotted a girl on a bike around Dutse heading to law school and gave her a ride. She was from Enugu campus and had never been to Bwari before. She had come on an overnight bus the day before. The journey from Dutse to Bwari on a bike is really not one that I would recommend as even in a car, it is a stretch. I really cannot understand why everyone cannot undergo their clearance in their various campuses.
In a country where transportation is so unsafe, how inconsiderate is it to expect people to travel all the way to Bwari to submit pieces of paper that are eventually thrown on the floor? Better yet, how about the whole process is done online, and no one has to leave their homes?

Once you get to Bwari, you have to go from one ridiculous queue to another, in the boiling heat, in order to submit the bank teller, your printed result (which they already have pasted on a wall), your transcript (which they also already have on record) and your assesments from attachment (which they gave you in the first place).

The next stage involves getting your certificate. You would think this would be easy, but mine was no where to be found. A number of people had their names mispelt or had the wrong grade printed on it. I was being sent from one office to the other in order to search for mine, but it was eventually concluded that it must have been an oversight and I would have to return the next day to get another one. Lucky for me I stay in Abuja, but a number of people flew into Abuja in the morning and had flights booked to return on the same day. With not so much as an apology, I was sent home to continue the process the next day.

On my way to school the next day in an unmarked taxi, we were stopped by 'Bwari Area Council Local Government Tax Force' not once, but twice, as cabs from town were not allowed to come into Bwari without paying some toll. We had to fork out N3000 in order for us to continue.

After getting the certificate, the next step is to go to the Supreme Court which is in the heart of town, to get it stamped, and then bring it back to Bwari to exchange it for your invite to the Call to Bar Ceremony. The process is just as ridiculous as it sounds, and most people have to get it done in a day.

There is no consideration for the cost of transportation for people to go back and forth three times in one day. The road to Bwari is not exactly great. This is an example of my friend Tonye's cost of Clearance:


The man writing reciepts as the Supreme Court boasted about how he had been doing this for over 10 years. After 10 years, has no one thought that there surely has to be  an easier way to get it done?

Well if no one has, then I have.

Dear Director General of Nigerian Law School,
Head of Student Affairs,
Anyone else in charge of this process.

I hope you are doing well. I hope you enjoy my blog posts from time to time. I have come up with a very simple solution to make the 'clearance' process much easier.

You do not need a 'clearance' process.

All the documentation you require us to submit are already in your posession from registration. Our court and chamber attachment slips are given to us to submit at this time. How about you do not give it to us at all as when we bring them back, they all end up in the trash. Make a note of those who did not successfully complete the attachment process and let everyone else continue to the next step.

The bank will be able to provide you with a code system, as is done with our fees, which can be entered into an online portal to ensure that call to bar fees are paid before hand. We do not need to enter flights, buses and bikes in order to submit a bank teller. This is the 2012 afterall.

The invites can ge given out on the day of the call. It just requires a little organisation, which I know you are not great with, but really this system is not sustainable.

I hope my suggestions will be considered before someone gets injured trying to go for 'Clearance', only to travel for Call to Bar 2 weeks later.