Yerima and his Child Bride 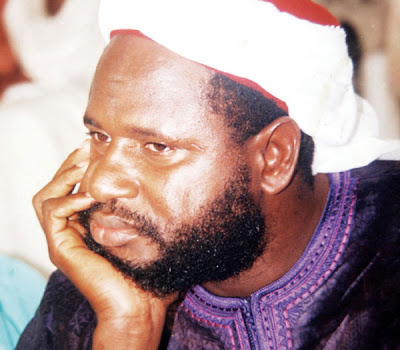 I dont know if you guys have heared of the story of yerima and his 13 year old egyptian bride. If you dont know you can see the story on 234Next. He just married the daughter of his egyptian driver.

When I was in Nigeria it was all over the news and I heard it from my dad who was so pissed off at the issue. He is claiming that he is a muslim and because the Prophet(SAW) married his wife at 13, he also has the right to do so under islamic law. The human rights council is trying to bring a case against him which could see him face a jail time of up to 5 years(errr yea right).

I have been following this story closely since I was home, mostly because it gets everyone talking. Kai I wish such things did not get me so upset. Left to me this pervert should be locked up with other peadophiles like him and they should throw away the key. Sick disgusting bastard. Hissssss. He already has like 4 wives, the last of whom he just married over a year ago is just over 20 years old. I guess to him, I am an old cargo at 22!

Anyway the main issue is that can he really be prosecuted for this "crime"? The human rights activist in me wants to say yes but the lawyer in me knows that realistically it will be very hard to build a case against him.
Firstly, being a "big man" he is automatically above the law so jail term is defo not hapening for him.
But more importantly, he claims to have married the girl under islamic law, which does not have an age limit for marriage for both men and women. The legal process in Nigeria operates under 2 systems which makes the laws governing things like marriage confusing. The question is which law is supreme, "God's law" or the law of the land?

So when you get married in a church or mosque and then you sign the legal papers which law is the most important? Of course Nigerians being the hypocrites that we are will shout God's law, but in reality it is the civil system that governs all other aspects of the marriage. It covers how many wives you can marry, how to dissolve the marriage, how to distribute kids, money and property etc. But that is only if you are getting married in the civil way.

Yerima did no such thing, so TECHNICALLY and legally he has not done anything wrong. Even culturally men in Nigeria marry girls from the age of 10 and no one can arrest them for committing a crime. That is just the sad reality of it. Culture backed up by religion is the law that 90% of Nigerians abide by.
In the North especially, most people are illitrate and the only law they know, understand and follow are the ones from their culture and the religion. The ones they have been taught and brought up with from when they are children. If someone has followed this path all thier life, it will seem shocking to them when you suddenly try and impose civil law issues as precious as marriage.

This in no way excuses Yerima from being a peadophile. But it does show that there is a problem with the legal systems in Nigeria.

What I am happy about is the fact that a number of groups of Nigerians stood up and tried to make him accountable for his actions. Even the U.N have called for the matter to be investigated. It is actions like this that can make Nigeria move forward.

In all of this, I hope we dont forget the child who is being robbed of her innocence because of poverty. So sad!

And in the words of a Thisday journalist, Dora needs to have a word with Yerima and encourage him to "buy Nigeria", cause I am sure there are a number of 13yr old Nigerians he could have picked, why did he have to patronise imported goods?lool