Dear Bayo,
I have read your letter over and over and each time I find something new to make me smile. I have made a game trying to find how many spelling mistakes there are and I have so far counted 27. Your punctuation also leaves a lot to be desired. What would Prof say if I showed him this letter? The money spent on your overpriced education is more than required to start up most viable businesses. The least you can do is not mix up ‘their’ and ‘there’.  I am convinced that you must have somehow bought your Oxford degree. And don’t you dare hit me with that Dyslexic excuse. You are simply so spoilt with auto correct that you have forgotten the art of writing.
Like you, there is also a lot you do not know about me, mostly because I did not give you the opportunity to.  I was brought up to be private and growing up, my mum scolded us for getting emotional in public or showing affection to people we did not know. The people we knew were so limited that I grew up withdrawn and shy, usually interpreted as cold.


I also have a plan for my life. I am ambitious and have a restless spirit. I love my job at the moment and I am great at it. Given the chance, I could rise to be CEO some day, even my boss knows that I am a threat to his job. Its marvelling how smart you are and yet you cannot calculate how much change is owed to you. I on the other hand can solve complex algorithms in my head in seconds. I probably should have been an engineer, but my mum thought that the course sounded too intimidating for a girl so I decided on Economics. That was when I still listened to my mother’s opinions.
I see you battle with your dad regularly and struggle with the burden of trying to be a better man but secretly trying not to disappoint him. I am also in this constant struggle with my mother, except ours is a silent war. We do not raise our voices in my family, do not have confrontations and always put on a show of unity. Left to my mother, I should have been married three years ago to Nuhu and settled in Kano with a baby, being a socialite and running a series of small businesses guaranteed to fail because I do not put in any real commitment into them. My main job will be a wife and mother ensuring they achieve their dreams. I will support Nuhu through his political aspirations till he eventually buys himself an office and I will play the dutiful first lady with a series of charitable organisations focused on women and children.


Fortunately for me, I have the most untraditional father, having been raised by a single mother himself, and he is my rock. I know you think I get my temper from him because he is a General, but it is the exact opposite. He is gentle, good natured and always has a smile on his face. He is also extremely disciplined, hardworking and intelligent. He has only one weakness as far as I know, and that is my mother. She makes every major decision regarding his career since they have been married, and he runs everything by her. She knows more about the military than any civilian should. And no matter how much we do not get along, I know she is the reason he is so successful.


That is part of the reason I have stuck with Nuhu, because my mum has a way of being right all the time. He is good for me, known to my family and will always take care of me. What we have is steady, safe and assured. I respect him and he is the leader in our relationship. I know he loves me, in his own way. Not the Hollywood type of love, there are no butterflies or skipped beats with him, it is pragmatic and realistic. He might take another wife down the line, but I don’t mind because I have never had him all to myself anyway. I am not sure I want to actually, I prefer him in small doses.
Do you know the ironic thing about my mother is that she married the love of her life. Her only love actually. They met while he was on mission in her tiny village which was plagued with regular rebel fighting where he rescued her and her uncle. She spoke no English or Hausa actually, only Fulani, and had never left the walls of her village. He rescued her from what was sure to be a life of abject poverty and misery and she still worships him for it. But for some reason she does not seem to think that I could get so lucky to find my knight in shining armor.

Before I met you Bayo I was also sure this was as good as it gets. I don’t know how we got in this deep or that it was even possible for one person to stir up so many feelings in me. I like, respect, admire, loathe and crave you, sometimes all at the same time. Every time I am with you, time seems to slow down.  I want to lay with you and take mental pictures of your delicate features over and over again until I have memorised every intricate pore of your face. I understand the feelings of passion you describe so well because you stir it up in me.

I have often fantasized about us running away together, to Monaco or Barbados or Tahiti, somewhere by the beach with a great view. You could start up a restaurant and I would sit by the beach all day sketching landscapes and selling it to tourists. We wouldn’t have a lot of money or nice things, you could definitely not afford your convertible on a restaurant income, and I would give up most of my heels. But we would be so drunk on our love, or passion as you say it is, that we would never notice.
But as we both know, this is just a daydream. Even if we decided to follow our naija daydream and be together, how far could we go? You are a devout Christian, even though you try to come off as relaxed. I am a muslim, even though according to my brother Bello, what I practice is not really Islam. Although I appear to have a non-chalant attitude, I do care about what they feel.  As modern as your parents are, they would not approve of us. My parents, brothers and whole community will reject us whole-heartedly. We are fighting the world before we even begin. Our culture and language are also worlds apart. But more importantly, we would both be breaking commitments we have made to people.

Yesterday I found out that my boyfriend Nuhu has been having an affair with Farida. I like the word “affair” because it resonates how dramatic the whole escapade felt last night. I was so upset that I walked for 30 minutes on the side of the motorway until I got picked up by a stranger called Mr Koffi who took me home. Trust me, no one was more surprised than me about how the night panned out!


Never in a million years would I have guessed that Farida would want Nuhu, she does not even like him because he is egotistical. The few times we have hung out together, Nuhu had let her know that he thought her career of dressing up rich people was a joke and she had called him names a lady should not even know. In retrospect, they do have two important things in common; the love for the finer things and an ability not to care about what people think about them.
I felt hurt at their betrayal but regardless of this, I will take Nuhu back because we belong together. I know he will send me extravagant gifts, usually shoes at first, and when this doesn’t work, he will blackmail me with his mum because he knows I have a soft spot for her gentle nature. I know that most marriages cannot be happy. People simply co-exist amicably in order not to grow old alone. Passion is for liberals like you, I am conservative.

In case I run into you in Lagos, please do not be surprised if I completely ignore you. I do not know how to pretend and we can certainly not be friends. Too much has happened between us to even try.

Thank you Bayo for allowing me to experience feelings I thought I was not capable of feeling. Thank you for putting up with my temper and teaching me the benefits of being friendly. Thank you for giving me a glimpse of a life filled with days longing for passionate nights. Thank you for being gallant enough to try and rescue me from my life. I love you for it.

Your letter can be classed as a declaration of love. Mine is a farewell. I think we have come to the end of the road.

P.s- Thank you for loving me.

Pps- I know you were married to Cynthia.

Since I cannot send you a poem, here is a sketch I did of you the day you fell asleep on my rug. I did it in pencil because I did not want to wake you up. 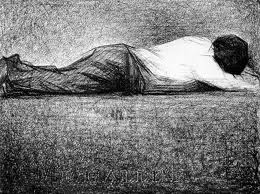