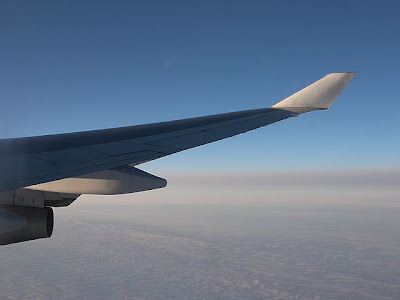 Anita Agba heard the speakers call for her flight to board just as she rushed into Nnamdi Azikiwe airport domestic wing, at exactly 10.50am. She had been so scared she would be unable to make it in time and had fought with the old taxi driver that drove her, because he staunchly refused to speed through traffic.


Anita tried everything: she promised to double his fare, swore to call him as transport on her return from Lagos; she checked her time incessantly and gave exaggerated sighs every time he let someone cut in front of him. All methods proved ineffective. He said “Better to be safe than sorry" and then proceeded to ignore her completely for the rest of the journey. But she was here despite his rule abiding speedometer and it was all up to her aching feet to race through security then run a marathon to the waiting aircraft.

Lugging her over-stuffed wobbly trolley behind her Anita cursed Olamide; her friend turned newlywed for throwing such an awesome reception. If the bride hadn’t been so willing to party or the DJ so on point with the tunes, she wouldn’t have spent the whole night dancing away instead of getting some much needed sleep.

If that had happened, she would not have overslept and gotten herself into this messy situation. “Olamide, I curse you.” Anita muttered under her breath as she proceeded to lift her heavy suitcase and place it on the X-ray belt. “I curse your wonderfully comfy bed in the Hilton and the Honeymoon suite you spent the night in. I curse the breakfast that awaits you when you get up and I curse your husband that will rub your feet when you ask him to.”

Anita gingerly removed her feet from her wedges, placing the chunky cork heels on the belt as well so they could be x-rayed. She muttered a silent curse too, for the underwear bomber for this inconvenience. After a disinterested female security officer frisked her, Anita grabbed her suitcase and with her shoe-straps still undone, started to run towards her check-in gate. She arrived before the BADA Airlines desk with one hand holding onto her Ankara wrap dress, to find that she was the only one panting, sweating and flustered.

Everyone was calm, chatting away and they all took a minute out of their day to stare at her. And the hot mess she was. Three hours of sleep after a night of partying in the hottest club, with the happiest bride and her entourage lends a certain look to someone. A look they obviously did not approve of. As far as they were concerned the dishevelled lady had no business being outside looking the way she did. Anita was inclined to agree. The announcement was repeated over the speakers once more and this time Anita was relaxed enough to listen to its entirety.Her flight had been delayed for an hour.

“Oh” she heaved a sigh of relief. Her free hand wiped her damp brow. “WE are here to complain about the delay” said a woman carrying a baby. “But it appears you owe BADA airlines your gratitude.” Anita gave the woman and her baby a “mind your business” smile. Usually such looks were accompanied with the exact meaning in words but she had suddenly remembered her online ticket was yet to be printed out.
Anita eyed the sign that indicated the ladies room. She badly needed to get in there and fix her hopeless situation.
On a second thought, it was probably best she not tempt luck once more and forgo vanity in name of printing out her online ticket. She had the reference number on her phone; she rummaged through her bag and unearthed her Blackberry. Knowing the amount of messages- both read and unread- lined up awaiting her attention, Anita thought it best to commence the search in a manner much kinder to her feet... and her throat.
The last thing she had to drink had been a glass of champagne at around 3.00am when the Best Man led the bridal party in a toast. Well, there was a day old half bottle of water in her bag and an empty seat next to a magazine rack so thanking God for her luck she walked towards it a determined woman. “From henceforth I am taking charge of my day”, she decided. A light stumble and Anita remembered her straps were undone. She rolled her eyes and changed her tune. “Once I sit down, I am taking charge of my day”.

Anita sat on the metal chair but for fatigued legs it felt like lounging on a cloud. Bending over she did up her straps when a shadow blocked her light. She looked up with her hands around her ankles and saw a tall dark man in reading glasses. He said, “You are in my seat.” “Oh I’m sorry” said Anita. It figures, there were magazines on the chair when she arrived. As she tried to gather her things her Blackberry fell to the floor. Her quirky Popeye cover snapped off and the battery came out. Shocked Anita leaned down, forgetting the open bottle of water in her hand. It poured out and splashed on the floor, soaking the Blackberry. “Ahh” Anita shrieked. A part of her just died. This was her third Blackberry in six months.

The tall man bent to help gather her phone parts scattered all over the airport floor, as he sympathised.

“Fuck My Life” Anita swore as she dragged her hands down her face and pulled on her cheeks.

“Sorry about that. Now I feel responsible.”

He battled his way through a throng of agitated passengers some of whom were considering forcefully opening the EXIT doors to escape. Not realising that that force of wind at this height would fling them all out like rag dolls in a tornado. Malik had also lost his glasses so could barely make out Anita.

The plane shook some more and then began to nose-dive. It tilted forward sharply and suddenly. All the passengers, most of whom were out of their seats were propelled forward and they began to crash into one another. Shoes hit faces, elbows jammed into stomachs, the grunts and sounds of pains filled the entire cabin. It was a sound that would stay with Anita till her last moments. The oxygen masks fell from the ceilings, but they would be of no help to anyone here. Nor would the life-rafts. The overhead compartments opened up and dropped their contents onto the un-suspecting passengers. Hand luggage and hastily bubble wrapped sacks crashed onto their heads. There was blood everywhere. People were screaming even louder. The left wing engine next to Anita exploded with a loud bang.

The aircraft tilted sharply to the right and Malik slanted his eyes and saw Anita get slammed against the seat-rest in front of her, causing her to die instantly. The second engine unable to bear the un-assisted weight gave out with a loud whistle and the plane began to nose-dive. The airplane reached the end of its 25,000 feet descent. It crashed into the ground and exploded, the fire starting from the pilot’s bunker and spreading through the entire aircraft. Within seconds, the BADA MD-83 plane was engulfed in flames.

There were no survivors.

All Malik could think about as he choked on his own blood and inhaled smoke was that he never got Anita's pin.

Xoxo
Miss B and SB