A JJC’s guide to Public Transportation in Lagos

Hello blogworld,
Law School has taken over most of my life and I can’t express how much I have missed blogging. I am currently doing my court and chamber attachment in Lagos. I chose Lagos because I have never lived here and thought it would be a good opportunity to test it out in case I decided to do my NYSC here. I must say there have been many days when I have asked myself why I chose to punish myself! The biggest challenge by far has been transportation.
I have struggled with learning how to drive since I was 19, but that is another post for another day. Throughout my time in Europe I used public transportation and it was never an issue. In Kaduna I hitch rides with my family and friends, and in Abuja I cab everywhere because it’s affordable and readily available.
On getting to Lagos, I quickly discovered that cabbing everywhere was not a very expensive option.
Chambers attachment was in Ikeja High Court which is about 15minutes away if the roads are free. As this never happens, it usually took me about hour to get to court. Sometimes it took much longer, and there was a time me and my friend had to get out of the car and take a bike to make it for 9am!
For the 4 weeks of court attachment, I shared a cab with a friend who lived close by. It usually cost between 1000-1500 depending on traffic and how generous we were feeling. We got the same cab guy to pick us and drop us back home. Averaging 2000 to and fro a day between us equalled to over 10,000 per week. It wasn’t cheap. Being adventurous I decided to try public transportation and it is definitely the best way to know your way around any city.

The public transports I tried are: 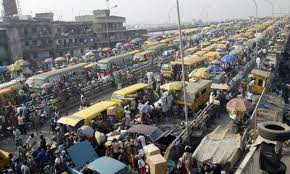 a)   Molue Buses- These are the yellow privately owned buses that commute specific routes. They are by far the most interesting. The conductors, drivers and passengers make for free entertainment. The two times I used this I was tearing up with laughter. The conductors and driver talk and act like they are high on drugs and are very very aggressive, rude and impatient. But the passengers are definitely just as crazy. The first time the conductor asked this fat woman to pay double fee because of “eru ti e gbe seyin” which translates to the load you are carrying on your ass! She replied that it was his mother that had a big ass and she wasn’t paying anything more! The second time he made this woman lap her three kids or pay double fare as well! Believe me when I say they are all pure jokes! When you want to get off you say “O Wa”. Saying “please I would this is my stop” gets you stared at, I know cause I tried it! Also “Waso” means N50 so you hear the conductors shouting “Ogba Waso” meaning from that stop to Ogba will cost you N50.
You are really squeezed between people who are constantly getting on and off and they drive like mad men! It’s definitely not comfortable and I would only recommend it for the entertainment value! 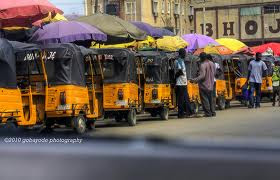 b)  Keke Maruwa- I am used to taking these from Bwari, but in Lagos they also only go through particular routes, from designated pick up and drop off points and have fixed prices. It’s my favourite one as you get the safety of a roof above you but are still able to weave through traffic. It also very affordable, never costing more than N100. They are however very very slow, and can hardly go over 30km/hr. They can’t go on motorways because of this so their routes are quite limited. 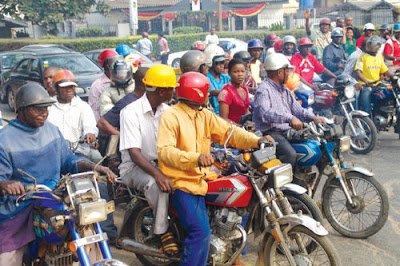 c)   Bikes/Okada- I am also used to these from Kaduna, but here you are made to wear a helmet. Alot of them will refuse to carry you if you do not wear it as they are fined by the million and one law enforcement agencies here. The bikes in Lagos are also death traps as they refuse to wait for any reason. They weave through the smallest cracks in their bid to get to their destination as soon as possible. They are however very useful in Lagos as they are guaranteed to get you to your destination before any car as the traffic is never ending. 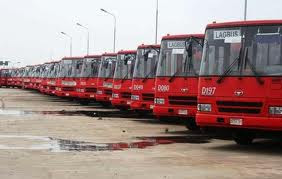 d)  BRT- These are the big red buses that connect the mainland to the Island through designated lanes which no cars are supposed to go on. You have to buy your printed ticket in advance and queue at the BRT bus stops. They are actually the fastest way to cross the bridge, and are quite clean. You can map out your route online with arrival times. However the only time I took it, the bus was over an hour late. I got there at 7.30 in the morning for a case in Igbosere High Court at 9am and the bus did not arrive until 8.35am. Standing for that long was very tiring but on arrival it got me to the Island at 9.05 which would have been impossible for a car. Unfortunately a lot of cars drive on the BRT Lanes so they also get stuck in traffic. It is air conditioned with wide seats and used by a number of working class people. I would recommend it.
So here’s my guide to using public transport in Lagos:
1)   Speaking Yoruba is a very big advantage when taking public transportation in Lagos. 90% of the cab and keke drivers are Yoruba. The Okada guys were usually Hausa so I had the advantage there as well. I have been told I speak ‘big english’ and this will definitely work against you. It actually helps to start in English and then come to their level in native or broken.
2)   Negotiate until they are walking away. It usually helps to have asked the average price from someone that knows the route but if this is impossible ask about three people until you get a consistent picture. This is only applicable to cabs and bikes as buses and kekes have a fixed price. Generally though they also tend to have consistent prices, I know they have very active unions in Lagos.
3)   Never admit that you do not know where you are going. I have found that once they can tell you have no clue how far you are going, they will make you pay for your ignorance. Enquire from people that know or bluff your way through, I always go with “Haba isn’t it just here” even when I am clueless.
4)   Google map actually works very well especially if you have an Iphone. Blackberry maps are quite decent as well, and although this is more useful when driving, it also helps you get a rough idea of your distance to your destination
5)   The most important thing is to ASK questions.  A city as chaotic as Lagos is really not a place to get lost. I have been amazed at how helpful people have been. Everyone I asked gave me advice, although they have this bad habit of misdirecting you instead of admitting they don’t know. Ask as many people as necessary until you get to your destination.
6)   Have loose change. Most buses, keke and bike rides cost between 100-300. Paying with 1000 notes means you lose out on your money as everyone claims not to have change.
7)   Have an open mind. It’s the only way you can enjoy it. I have thoroughly enjoyed my experience and I know a lot of my friends could probably not give it a try but you really have nothing to lose. It also really makes you appreciate being in an air conditioned car.