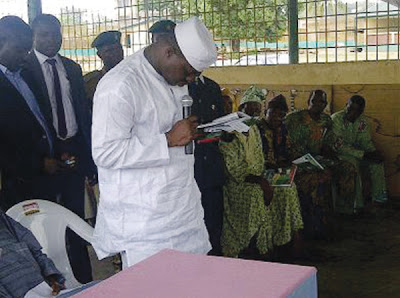 "Speaker, House of Representatives, Dimeji Bankole at the weekend burst into tears on sighting the young inmates of a remand home which he built in Abeokuta."

This is one of the stories on Next234 today, and this is a responding comment by a reader. He sums up my thoughts perfectly. As far as I am concerned Bankole is one of the biggest disappointments to this government.

"These are the kind of tears a man cries when he is coming towards the end of his tenure and he realises the catastrophe he is going to leave behind just like the old leaders he used to condemn. Suddenly the man has realised he is just like them. These are the kind of tears a man sheds when he has been living in wonderland; living a life of fantasy and he is abruptly and suddenly brought crashing back down to earth.
These type of tears are the hardest to hold back. This is because you cry for yourself. You shudder at the realisation that you are a very bad person. You discover who you really are quite suddenly. I can guarantee that while he cries, in the back of his mind he is thinking of all the fast cars, houses, women and lavish parties he has been spending money on.
One of his cars would solve the problems of that place. A bottle of champagne that he has a shower in will solve a whole family's problem in the Nigeria we live in today. Even heavier thoughts may be going through his head because only God knows what else he engages in. So free the guy. Im get plenty wahala for head." John
"Someone needs to get this guy a big basin for his crocodile tears. This cocky speaker who ostesibly has perverted the use of his Harvard degree by becoming one of the greatest treasury looter in the history of our nation should be shedding tears of blood. We all celebrated him when he emerged to succeed his predecessor - the crude hairdresser, on the belief that he will become a role model for the youths of this generation. But ever since, he has presided over a worse House of Reps. with a notorious reputation of being one of the most unproductive legislative house in world history. He will need a lot of big basins and many face towels to take care of his tears, because, he's only seen a tip of the iceberg in Nigeria's catalogue of woes - a consequence of corruption and an unconcerned attitude. " Bondu Alaska
xoxo
Miss B
Posted by miss b at 19:22